'Kiss the hand you can not bite', an old Romanian proverb of Turkish origin, is a useful phrase to remember, when negotiating the huge queues at the Hungarian side of the Romanian border. Sometimes, several kilometres back from the actual line, trucks and cars form massive queues. Taking a leaf from the London courier rule book, we skirted down the outside, at the first small wave on, from the transcontinental truckies.

Having been told of speeding infringements being paid for with a packet of Marlboros and a can of coke, we approached the guards fully stocked. Producing a New Zealand passport was all it took. That, and a current 'green card' extension, of our motor insurance.. Some rather dodgy looking 'tax collectors' were reluctant to give receipts, as I remember.

It only took us a couple of hours to be humming along Romania's quiet rural roads, past fields of hay and poppies. Clouds, at times looking thunderous and menacing hovered around the hills to the east, so with no particular place to go, we deviated north and skirted around the city Arad, in the wine growing region of Crisana and Banat.

40 kilometres north we swung east again, towards the small village of Ineu, with a petrol crisis looming. We rather stupidly hadn't filled up in Hungary. We were now forced to find a gas station, on our first day in a new country. Always a nerve racking experience with a new language, currency, and pump etiquette.

The two open air petrol pumps were located near the town square, and were unattended, which fitted, because they didn't look capable of pumping anything anyway. But we had no choice, we had just gone onto reserve, so we put the BMW up on the centre stand and settled in for the wait. We figured we were on the right track when a couple more vehicles joined the queue behind us.

Two hours later, we met our first English speaking Romanian. A young guy in his mid twenties said there hadn't been petrol at the station for three days, and cars were queuing up behind us, thinking we had some insider information. Alas, Mike thought maybe tomorrow 4 o'clock. So our new friend directed us to Ineu's flashiest hotel, and invited us to a BBQ at his mates place, Christian.

Christian had a striking resemblance to a well known MTV presenter, and sported stars and stripes boxer shorts, he was the spitting image of Ray Cokes, and had a taste for beer and 'palenca' ( potent cherry distillate). His hospitality was enormous, and he led us down to the river behind his apartment block, for an open fire and a few drinks. Mike showed me how to select a good wet and sappy stick for the BBQ. We peeled off the bark and fashioned a sharp point on which we speared a fist sized chunk of pork fat. Roasting it in the naked flame, it started dripping hot fat, which was dabbed onto long white loaves. Eventually the lump was reduced to a charred, crispy piece of crackling, and was sliced onto the fat soaked bread with fresh spring onions to make a tasty sandwich. BBQ, Romanian style.

Our young hosts entertained us for the three days it took for the petrol to arrive. We drank sulphur tasting, health giving water from the local well, explored the belfry of the towns old Roman Orthodox church, and had piano recitals at their family home. They took us to the rundown local cinema to watch ultra violent, ultra cheap, subtitled American shoot-em-up movies, and in the evenings we toured the bars and clubs. The morning the petrol turned up, Mike rushed around to tip us off and so we were lucky to get in the growing queue early. Our introduction to Romanian generosity and hospitality was moving and unexpected.

After a breakfast of neon coloured fruit loops, washed down with coke, we left Ineu, and headed south east through a hilly rural landscape. The sky darkened, lightning flashed, and thunder boomed. Lightning struck a hill, and we sought sanctuary in an open sided, stone floored hay barn. We were soon joined by three cow herders and their nervous stock. Another terrifying bolt of lightning, this time striking not a hundred metres from the iron roofed shed, felt terribly foreboding as we neared the Transylvanian, mythical home of Count Dracula.

At the risk of inciting the wrath of the Transylvanian Dracula Society, Count Dracula is a creation of Bram Stoker's 1897 novel, and has no real life, or living dead equivalent. The character however is loosely associated with another delightful chap, Vlad Tepes (Vlad the Impaler, to his mates) who passed through these mountains between bloodthirsty encounters with the invading Turks. He punished his enemies by carefully driving a stake through a victims backbone, avoiding vital nerves and organs, to ensure at least 48 hours of conscious pain before death. Apparently he rarely ate, without a Turk writhing on a stake in front of him.

Today, these two characters, along with a 17th century Hungarian countess, famous for murdering 600 young girl and bathing in their blood to retain her youthfulness, have created a myth that attracts tourists by the droves. Being leather clad bikers, it seemed appropriate to join them in the celebration of the macabre. The crumbling and mysterious Bram castle (commonly referred to as Dracula's castle), is in danger of collapsing due to cracks in its foundations, taking its fairytale turrets and Mediterranean white washed walls with it. Free tours were available in four different languages.

After stopping for lunch at Romania's premier ski resort of Poiana Brasov, we entered the spectacular Prahova Valley east of the Bucegi Mountains on the E60 highway. Just before the ski resort of Sinaia, we attempted to find a free camping site, out of sight, on the side of the road. Not an easy task as most roads zig-zag straight up the valley walls into the fir clad mountains, with very little flat ground. A small side track, with long grass in the wheel ruts, was just the break we needed, and promptly set up our small tent next to the bike on the outside of the bend, overlooking the gothic Peles Castle. We broke out the mobile kitchen and prepared tinned tuna and tomato pasta sauce, our firm favourite at the time. Not wanting to attract undue attention we didn't light a fire, and retired early in the black night. For security, the tent was situated almost under the bike, and I set noisy booby traps of empty bottles round the encampment and stashed the rubbish bag under the bike. I slept with the heavy bike chain beside me, and listened intently to the strange sounds of an unknown forest.

I awoke bolt upright to the sound of a deep and guttural growl, just inches from my head. Snatching the heavy chain I fumbled with the zip door of the tent and stuck my head outside. Screaming and pounding the chain on the ground, I could just make out the dark shape of a bear, loping down the track. It stopped and turned it's head to survey it's opponent. I yelled and thumped the chain down hard again and again. With a huff, it turned and strolled down the track into the darkness. Fear not the vampires in Transylvania, but the tuna loving bears !

Riding down the stunning forested valley we descended to the fertile agricultural plains of Wallachia. Having escaped most of the heavy industries, by travelling pot holed back country roads instead, the first sight of Ploiesti was a shocking one. Industrialised with frighteningly bad pollution, Ploiesti has been Romania's oil refining centre since 1857 and ranked sixth in the world in the production of oil between the two world wars.

Further south still, we braved the busy streets of the Romanian capital of Bucharest with a population of over two million. Taking a break out side the world's second largest (after the Pentagon, Washington DC), Nicolae Ceausescu's, House of the People, we made a decision to break for the border.

Having experienced a green and luscious land with spectacular mountain scenery, warm, hospitable people, as well as exciting wildlife, we wished to avoid the spoiling of such images and made directly for the mighty Danube river, which represents the southern Romanian border with Bulgaria. Preparing once again to 'kiss the hand we could not bite'. 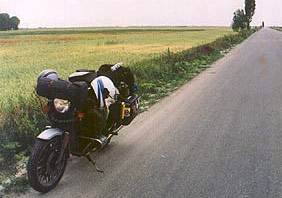 Romanian fields of hay and poppies. 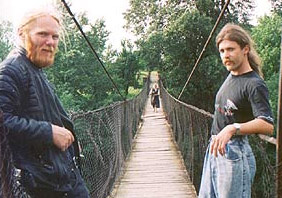 With Mike heading for a BBQ. 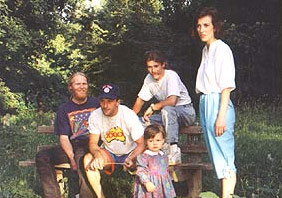 Christian and Mike with his young family. 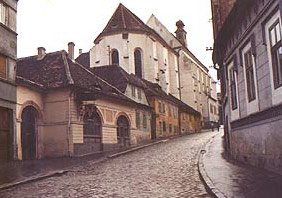 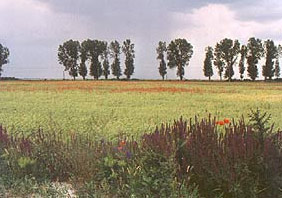 Fields of poppies and thunderstorms.