The Kashmir issue. The cause of two of the three wars fought between India and Pakistan since independence from Britain in 1947. The Kashmir issue becomes a chilly prospect as the two countries enter the nuclear age with such gusto.

Saskia and I had motorcycled from England and had just ridden over the second highest road pass on earth, the Taglang La (5328m), to meet the issue head on.

Passing over the Zaskar Mountains, and following the Ladakh Range through Leh and Kargil to descend the 3,500m Zoji La pass, we entered the Vale of Kashmir through the back door. The Zoji La, an unsealed section of road zig-zaging its way down a scree slope, has to be negotiated in a choking convoy of busses and trucks which wait in huge alpine carparks for their turn to attack the steep pass. Half way down there sat a small memorial that required every military personnel to stop and pay respect.

It was a long and tiring day dodging army checkpoints when we passed the Hazratbal Mosque, the scene of a lengthy siege two weeks later, on the northern outskirts of Srinagar, summer capital of Kashmir, late in the afternoon. A vista opened up of Dal Lake on our left and the road veered right and over a humpy bridge and into a bustling street scene. A noisy crowd of stick waving women, covered head to toe in black chadors completely blocked the street, and were headed directly towards us. Pulling over swiftly to the side, scattering the chickens and stray dogs, a group of children crowded around us yelling "Go, go back, go. The women make strike."

The women of the Kashmir had had enough. This form of street protest the only way to vent their frustrations at the brutal treatment dished out by the Indian Army. Crackdowns, they were called. The Indian Army would miraculously produce an informer, masked to protect his identity, of course, and entire blocks of residential areas would be emptied onto the street and citizens made to walk past the informer for identification. The unlucky suspected militants were then bludgeoned with rifle butts, in front of women and children. Such an event led to the display of frustration before us.

When the British left the Indian Subcontinent in 1947, Mountbatton was undecided as how to draw the line between independent Muslim Pakistan and Hindu India through the Himalayan range in the princely and Muslim state of the Kashmir. The Maharajah, led by a Hindu prince, made their decision only when Pakistani tribesmen invaded in support of an uprising of their Muslim peasant, Kashmiri brothers. The Maharajah fled to Delhi and signed over their 'princely state' to India.

So began the first Indo-Pakistan conflict. The area is presently approximately two-thirds Indian to one-third Pakistani while some Kashmiri want their own independent country. Since 1992, nothing short of complete independence from the worlds two latest nuclear powers has been demanded by the Pakistani sponsored, Jammu and Kashmiri Liberation Front. And so the three main parties continue to eye each other suspiciously across inhospitable high altitude deserts, and more recently, exchanging artillery fire, with jet fighters and bombers soaring around the Himilayan peaks.

Part of the problem was that the Maharaja forbid the British to own land in the cool lushness of the Vale of Kashmir, which led to the building of spacious and luxurious mahogany houseboats which today are still one of the regions most worthwhile attractions.

The conflict makes for interesting situations with the Kashmiri traders who rate worldwide as tough bargainers. The troubles keep the multitudes away and unfortunately tourist dollars are thin on the ground which is a double sided sword. Prices were cheap but the pressure on the merchant to make the sale was intense. Houseboat agents hang round in packs waiting for buses to come in on the boulevard near Dal Gate.

Our hasty retreat from the angry throng of women bade us good fortune. Sitting quietly in a field just north of the bridge we were approached by a young Kashmiri whose uncle had three plush 5 star houseboats on the quiet Nagin Lake, not a kilometre back up the road. Our gracious and determined hosts made up tea to help the hard bargaining called for. Its not as easy as you might think and is fraught with pitfalls.

Everyone likes a bargain and while its tempting to get that little bit off the tab, in this case, you do get what you pay for. Food can be included, three meals a day if you wish, so squeezing another rupee off the bill could mean the difference between a full cooked English breakfast and a boiled egg.

While on board you are the honoured guest, kept safe and sound by the respected host whose best interests are served by your security. They are a haven of peace and tranquillity from the surrounding hardship and misery. Our floating palace was securely anchored to the eastern shore and many times, the sun set in the golden dusty haze of the western sky across a reflective lake. A calm that was often broken by the sound of gunfire when darkness overtook the light.

The houseboat comprised of five main rooms, a master double with en suite and bath, a large bedroom with a double and single bed, dining room and living room. The living room was full of varnished wood and plush red velvet, with subtle shaded lamps on the walls and a stocked library behind the writing desk, all straight out of the 30's. Tea was served twice a day in china cups bought in on a wooden tray. Breakfast was often served on the canvas covered roof, while the veranda was for lazy sunsets and sharing an afternoon or morning 'hookah' or waterpipe of tobacco, with a local shikara paddler.

Shikara's are Srinigar's main form of waterbourne transport, being slim and sleek wooden canoes paddled with a single blade from either the front or back. Some are intricately carved and adorned with billowing fabrics, lace trimming and sprung seating. Still others are converted to corner stores selling everything from chewing gum and toilet paper to saffron and tomato sauce. Time on the back terrace was often a game of cat and mouse with the waterbourne traders who prowl the houseboats hoping for the all important invitation to show their wears. Eventually curiosity prevails and within an instant the sanctity of the living room is invaded by a smooth talking Kashmiri and his side kick as the room begins to resemble a carpet or carpenters shop, or in our case a shawl shop.

The region produces high quality shawls from finest indigenous lambs wool, decorated with silk thread in an array of floral motifs. As if the 'garden of India' was not inspiration enough, designers also take influences from the Mughuls, whose formal gardens survive still, and reached their zenith in the Vale of Kashmir, where design followed regular patterns involving water channels and cascades with ornate fountains. 'The Shalimar in Kashmir' is a famous and maintained example of these gardens which is open to the public (should any one foolishly consider visiting). 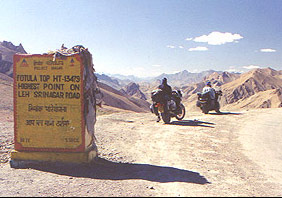 The highest passes on earth. 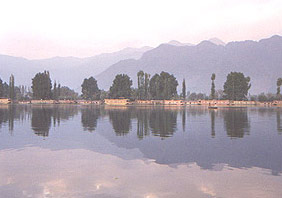 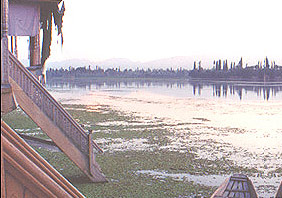 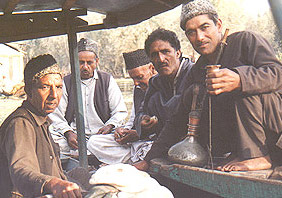 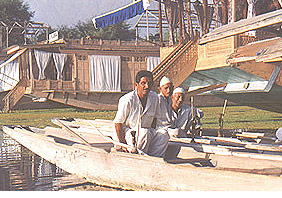 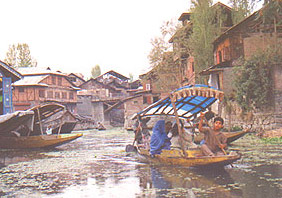